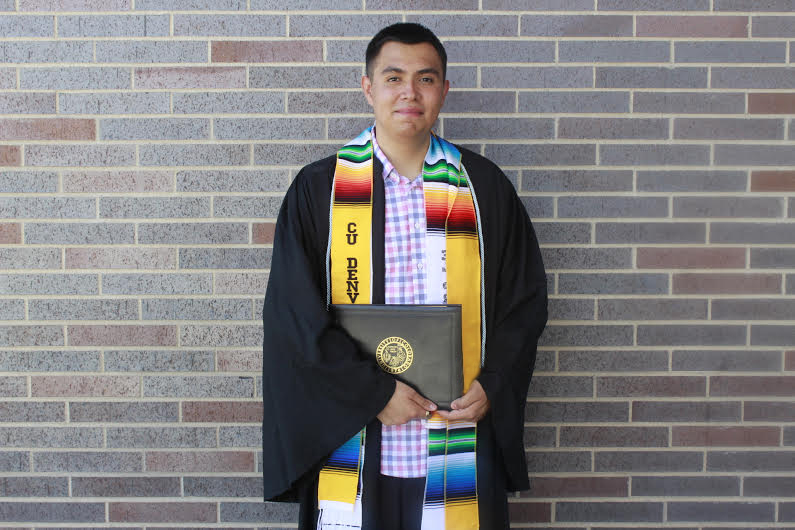 “Defiant” might not be the first adjective that comes to mind when describing a recent college graduate, but for DSF Alumnus Jose Miguel Jara-Garcia, “defiant” is the perfect way to describe his path through higher education.

“I am not the first Latino to graduate from college, but the statistics for Latinos and Latinas are not encouraging,” Miguel said. “Identifying as a Latino in the United States statistically means I am going to end up in two places: jail or in a gang. I am a defiant in a sense—I beat the stereotypes society puts on someone with my ethnic and cultural background. I don’t mean ‘defiant’ in a bad way, but as in, ‘I pushed through the odds.’”

As the first in his family to graduate from college, Miguel said his pursuit of higher education has opened the door for deeper conversations about college in his family.

According to Miguel, who graduated from the University of Colorado Denver at the end of this summer (2017) with a Bachelor’s of Science in Human Development & Family Relations with a minor in Communication, he has tried to help pave the way for his younger brothers’ success. In fact, Miguel sees himself as a role model to his peers as well, and wants to support those around him by passing on the knowledge and skills he has gained.

“DSF helped me develop the mentality of helping other students. Even my friend sees me as a mentor: The knowledge and skills I gained from DSF, I pass to them. The same support that DSF gave me, I give them,” Miguel said. “In my family, I’m helping the younger generations learn about college, and helping them become acquainted with a college campus. They look at me and say, ‘If he can do it, I can do it.’”

Miguel says he enjoys helping people in both a personal and a professional capacity. Through college and post-graduation, Miguel held an internship with the City of Denver in which he had the opportunity to give back to his community.

“I’ve always wanted to work with people—psychology, sociology, social work. Through my internship, I was able to help people. It was a nice blend of the work I want to do,” Miguel said.

Now, having been accepted into two different Master’s programs at the University of Denver, Miguel is weighing his options for graduate school while working part-time for the City of Denver in the Office of Economic Development and part-time at the University of Colorado . Further down the road, Miguel sees himself working at either a local nonprofit, or a nationwide tech corporation like Apple or Google.